Last Thursday I challenged everyone to a race at the Velocity Raceway go-kart track. This race is now an annual tradition at VendAsta. I tried very hard but I was unable to catch up to Michael Bree who you can see in this video in the car number 10. The clear winner of this Challenge was again Dale Hopkins. This kid can swim and drive. The team prize was snatched by the DD team AKA The Nathans.

Posted by Allan Wolinski at 12:20 AM 0 comments 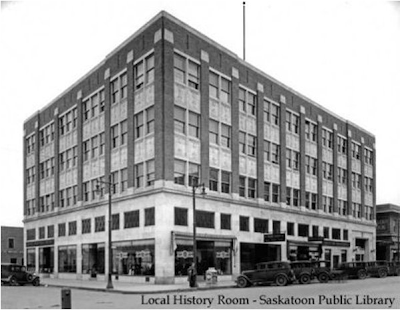 I'ts official. We have just signed a lease on the 5,000 sq.ft. , top floor, of the Saskatoon historical landmark: The Avenue Building. The space we have chosen could not possibly get any sweeter. The Avenue Building is located at the heart of downtown Saskatoon (corner of 3rd Ave. S and 21 Street E) and it has quite a history.

Originally known as the MacMillan Department Store, the structure on the south-east corner of the intersection was built in 1912 by Saskatoon’s future mayor, Frank R. MacMillan. In 1927, the T. Eaton Company purchased the business, but not the building, as it was ready to open its own store directly across the street. MacMillan’s store was the single largest department store in the city at that time. After selling the business to Eaton’s, MacMillan extensively remodeled his building, inside and out, to convert it to office space, and renamed it the Avenue Building.

It featured expansive atriums with elaborate tilework, some of which exists today. It is now home to a variety of businesses and organizations. It even became a movie set, portraying a police station, in the movie "Murder Seen".

In above picture from 1931 (saskatoonlibrary.ca): The Avenue Building, built in 1913, is seen at the corner of 3rd Avenue South and 21st Street East (across from Army and Navy). Also visible in the image are Avenue Coat and Dress Shop, N.Bawlf Grain Co., Saskatoon Novelties, Bank of Montreal, and Fingard Bowladrome. Autos are seen angle parked on the street and a man is also seen in front leaning on a light post.

Posted by Allan Wolinski at 12:31 AM 5 comments